If you are aware of any violation of the following corporate governance rules, committed by any our directors, officers or employees, related to the following:

After two consecutive months of rate reductions, the Manila Electric Company (Meralco) announced today that the overall rate for a typical household slightly went up by P0.0625 to P9.6467 per kWh from last month’s P9.5842 per kWh. This is equivalent to an increase of around P13 in the total bill of a residential customer consuming 200 kWh.

The overall increase in this month’s power rates would have been higher if not for the implementation of an additional Distribution Rate True-Up refund.

To recall, Meralco’s proposal to refund around P13.9 billion distribution-related charges was approved by the Energy Regulatory Commission (ERC) in early 2021. This is equivalent to a rate refund of P0.2761 per kWh for residential customers, implemented beginning March 2021.

This amount represented the difference between the Actual Weighted Average Tariff and the ERC-approved Interim Average Rate for distribution-related charges for the period July 2015 to November 2020.

On March 7, 2022, Meralco received an ERC Order dated February 23, 2022 expanding the coverage of the refund to include the December 2020 to December 2021 period – amounting to an additional P4.8 billion. For residential customers, the refund is equivalent to another P0.1923 per kWh that will be implemented over a period of 12 months.

Residential customers will see a total of P0.4684 per kWh refund under line item called “Dist True-Up” in their bills this month.

Generation charge went up by P0.2780 to P5.4737 this month from the P5.1957 per kWh registered the previous month, mainly due to higher charges from the Wholesale Electricity Spot Market (WESM).

Despite improvement of supply conditions in the Luzon grid, WESM prices remained elevated in February and the secondary price cap was imposed 5.63% of the time. With the increase in demand and the scheduled maintenance outage of Quezon Power and First Gas-San Lorenzo plants, Meralco sourced additional supply from the WESM in the February supply month. As a result, WESM charges increased by P13.4211 per kWh.

Charges from Independent Power Producers (IPPs) also increased by P0.1625 per kWh mainly due to the lower dispatch of Quezon Power and First Gas-San Lorenzo. Quezon Power is on scheduled maintenance outage since February 5, while First Gas-San Lorenzo Modules 60 and 50 are on maintenance outage since January 20 and February 14, respectively. These maintenance shutdowns were performed to ensure availability of their supply during the summer months and the election period. Peso depreciation against the US dollar also contributed to the increase in IPP costs, since around 97% of these costs are dollar-denominated.

Charges from Power Supply Agreements (PSAs) were higher by P0.1510 per kWh, as the dispatch of First NatGas-San Gabriel plant continued to be affected by Malampaya facility’s inability to supply sufficient natural gas. Lower excess energy deliveries, which are priced at a discount, also contributed to the increase in PSA costs.

This month’s generation charge increase would have been significantly higher, but Meralco took the initiative to cushion the impact in the bills of its customers by coordinating with some of its suppliers to defer collection of portions of their generation costs. These deferred charges will subsequently be billed on a staggered basis over the next three months as directed by the ERC.

Transmission and Other Charges

Transmission charge, taxes, and other charges for residential customers registered a net decrease by P0.0232 per kWh. The collection of the Universal Charge-Environmental Charge amounting to P0.0025 per kWh remains suspended, as directed by the ERC.

Meralco reiterated that it does not earn from the pass-through charges from generation and transmission, as payments go to the power suppliers and the system operator, respectively, while taxes, universal charges, and Feed-in Tariff Allowance (FIT-All) are remitted to the government.

Distribution, supply, and metering charges, which are the only costs that go to Meralco, have remained unchanged since its reduction in July 2015.

In the succeeding months, Meralco expects that the continuing increase on global fuel prices would have a significant impact on power rates, particularly on the generation charge, and urges its customers to be extra efficient when using electricity.

Being energy efficient will also help them better manage their consumption, which historically increases by 10 to 40% during the summer months.

Meralco advises its customers to know how much their gadgets and appliances consume through the Appliance Calculator in the Meralco Mobile App as this will help them stay in control and manage their monthly budget better.

Customers can also save on energy consumption when energy efficiency practices are done right. Keep the airconditioning unit (ACU) on when leaving the house for a quick one-hour errand. This is 17% more cost-efficient because by turning it off, the ACU compressor works harder to cool the room again leading to an increase in consumption.

When leaving the house for just two days, it is 12% more cost efficient to keep refrigerators on instead of turning them off.

Please refer to below chart on the Distribution True-Up Refund:

1. What is the Distribution Rate True-Up refund?

The Distribution Rate True Up ordered by the ERC in March 2022, is a refund of the rate difference between the Meralco’s Interim Average Rate (IAR) of P1.3810 per kWh and the Actual Weighted Average Tariff (AWAT). The AWAT represented the actual resulting average of the distribution rates for various customer classes. In general, distribution rates of residential and small business customers are set higher relative to larger businesses. The AWAT varies per month due to the movements in consumption of each customer class.

For the period December 2020 to December 2021, the AWAT turned out to be higher than the IAR. To keep Meralco’s rate at the IAR, the difference between the AWAT and IAR was ordered to be refunded. Based on ERC’s order, the refund will start in the March 2022 billing and will run for about 12 months. The average rate of the refund is P0.1064 per kWh. For residential customers, the refund rate is higher at P0.1923 per kWh.

2. Why is there a DRTU refund?

Starting March 2022, the combination of the two ERC orders will result to a total refund average of P0.2592 per kWh. For residential customers, this will be an additional refund of P0.1923 per kWh. For your easy reference, this refund will be called as Distribution Rate True-Up 2 (Dist True-Up2).

Residential customers consuming 200 kWh will see a refund total of P0.4684 per kWh or a total monthly refund of Php 94 starting March 2022 under the line item “Dist True-up” in their March 2022 bill.
By April 2022, both refund amounts will be reflected as two separate line items referred to as Dist True-Up1 and Dist True-Up2 respectively.

3. Why is it being implemented now?

4. When will the refund start?

5. Who are qualified for Distribution Rate True Up refund?

Table 1 shows the rates of refund that Meralco started implementing in the March 2021 bills under DIST TRUE-UP1 and the respective customer class:

Table 2 shows the rates of refund that Meralco implemented in the March 2022 bills* and the respective customer class:

By April 2022, both refund amounts will be reflected as two separate line items referred to as Dist True-Up1 and Dist True-Up2, respectively

6. How is the DRTU refund computed? Is it a fixed rate or does it change?

Both Distribution Rate True Up refunds are on a fixed monthly per kWh rate.

Information will be available at the back of the bill. 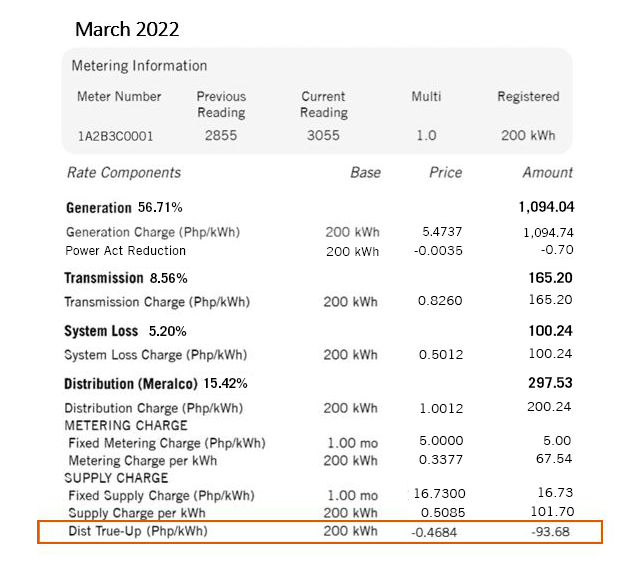 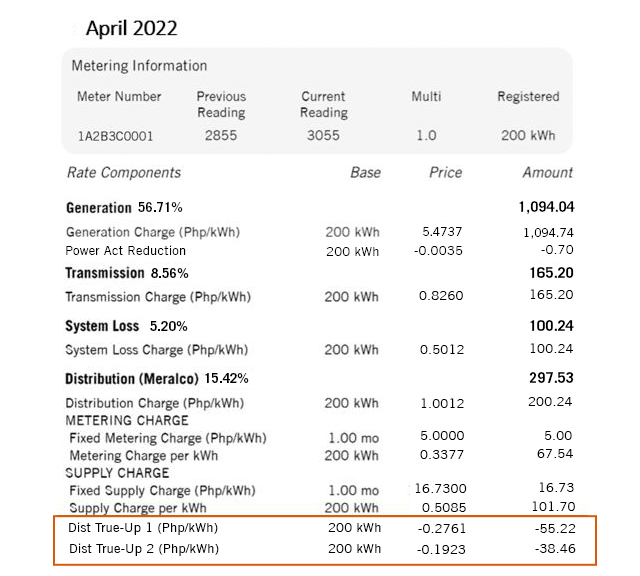 9. Does everyone get a refund, regardless of payment status?

The refund is mandatory and will be reflected in the bill even if payment was made late.

How can we serve you today?

Power up your home with Meralco

Thanks for staying connected

Get the latest news and service advisories from Meralco.